My Mom & Dad got married 61 years ago this week. Normally, it’d be a grand celebration of a marriage that has lasted so long, but … Dad didn’t make it to the party this year. His journey on this earth ended in January. But even so, I wanted to take the space of this blog and dedicate it to the life they fashioned together over the course of six decades. And I can think of no better way to give tribute to the love they shared than to post the thoughts my 24-year old son shared at my Dad’s funeral. His insights that are rich in truth and depth that extend far beyond his years. In today’s world that is full of disposable relationships, I hope this will be a thought-provoking challenge that rewrites the definition of love for all who join their lives together in marriage.

A thousand tales have been penned throughout time circling about this idea, this one central theme. True love. You see it in the tales of Cinderella and Prince Charming or Snow White and her knight. Or perhaps not. The modern mind turns a scornful eye on these tales, mocking the foolishness of delivering your heart into the hands of an unknown soul. They cast their slings and arrows and saunter away satisfied that they have slain the very idea of true love. Maybe it’s even a phantom, for such a thought could never have truly existed, not even in stories. And in this belief, the modern thought rests, concluding … there is no such thing as true love.

But could it be that we have been mistaken? Not in the mockery of foolish infatuation, but in believing such a shallow thing could ever bear the in-folding and enveloping weight that is raw love.

Could it be that we have so missed the mark as to believe that love is the prospect of the young… as if a sapling could tower above an ancient oak?

I recently watched my grandfather succumb to years of disease, slowly losing bits of his freedom as the years wore away. And through it all I watch my grandmother patiently attend him, never once voicing a complaint or wilting under a load far beyond what I could imagine carrying. All the while I wondered at her. How did she go on? How did she continue giving? I could grasp the reason in my mind, but in my heart, I never understood, not really.

In many ways, I thought I had come to terms with his passing through the past few years, but as the images flowed by on the screen at the funeral home, I was reminded of the man I had known and I reflected on those memories.

Amid this wash of emotion, Mom told me that her prayer had been that the end would be clear and my grandmother would be spared the heartrending end-of-life decisions.

It seems God answered her prayer. She told me that one of the few responses left to him was that when my grandmother offered him food, he would open his mouth to receive it. But in his last days, maybe God chose to give him a greater portion of lucidity because when she offered him the food, he shut his mouth and refused it. Again and again he did this. It’s as if he could feel himself slipping and with his final act, with one last measure of devotion, he chose protect his wife and to spare her that pain.

In that single crystalline moment of his sacrifice balanced against her years of patient care, I think I glimpsed the face of true love. Not in the supple embrace of star-crossed lovers, but in the worn, battle scarred hands of two souls who had found love like that of Christ, who in His great love for us, surrendered himself to death, even death on a Cross… exhibiting love that endures to the end, and love that will echo in eternity. 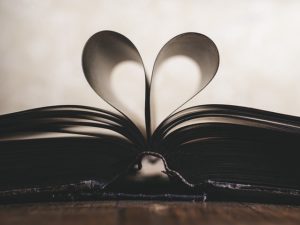 Let us not love with words or speech
but with actions and in truth.
1 John 3:18

"Is Christianity bigger, broader and more fulfilling than what I've experienced?"

Lots of Christians who attend church every Sunday and read their Bibles ponder this unspoken question.